Australia is home to an ever-expanding number of extremely talented people, one of whom is swimmer Giaan Rooney. By the time she was a teenager she has already made the Australian Commonwealth Games Team and would go on to win gold and silver at the Olympics, eventually becoming a well-known sports reporter. We were lucky enough to talk to her about her success and how she balances work and home life, especially as a mum of two young children. Read below to find out what this Life-Space Probiotics ambassador and Olympic athlete had to say about sports, health, and her best role yet – being a parent.

As a child were you highly active in different sports? Did you find that you weren’t great at any of them?

“As a child I was always active and outdoors. From the age of 11, I started swimming during the summer and playing netball in the winter. Netball was my other great love – I managed to make the state netball team in my teens. But, it was swimming that ultimately took over. My swimming coach saw my talent and suggested that I take it to the next level competitively. Only 14 months after that I made my first Australian team. By the age of 15, I’d made the Australian Commonwealth Games Team.

So, given my successes, I can’t say that I was bad at any of the sports I tried!”

Did you feel ‘at home’ in the pool from an early age and want to compete, or did swimming start out as a hobby that you eventually realised you were passionate about and very talented at?

“Since joining the swim club in primary school when I was 11, I began realising how much I enjoyed swimming. I started off at two afternoons a week, loved it, begged my parents to let me go three afternoons a week. Then I begged for more. Not long after, I was competing at a high level with a coach who could see me reaching the Olympics!

I didn’t grow up as a little kid thinking I want to go to an Olympics or to be a swimmer. I made the decision after realising how much I loved swimming. Plus, I saw how it was taking my life in a whole new direction, in a good way.

There’s no way I could have dedicated myself to swimming at an elite level and be an Olympic athlete if I didn’t love it in the first place.”

What did it feel like to win gold at the 1998 Commonwealth Games? How did all of your competitions and wins from 1998 – 2006 impact your life?

“When you’re in it, you understand it’s an incredible moment but you don’t realise the enormity of it until you’re way past that time. The longer I’m away from all my wins, the prouder I am and the more grateful I am to have been a part of it all.

I retired at the age of 23. while a lot of athletes have trouble transitioning from sport to life, I had an easy transition because I’ve always been a realist. I looked forward to life after being an athlete.

Being an athlete and competing taught me how strong I am and how to have a good work ethic. The wins are incredible, but it’s what happens in between that teaches you the most. I learnt about my strengths and weaknesses. Perhaps more importantly, I also learnt that you have to do a lot of hard work and make sacrifices if you want to get places in life.”

Do you think that the intense training and your sports career prepared you for motherhood in any way?

“As a mother I found that my sports career had taught me something very useful, and that’s to always trust your instincts. When I was competing, I knew what I needed to make my next move be. Now, I always trust that same instinct to guide me with what’s best for my kids, and that includes their health.”

“I got really into health research during my pregnancy. While researching, what stood out to me is the importance of a healthy microbiome throughout the first 1000 days of new life. It’s important for kids to be exposed to good bacteria by playing outdoors and being in the fresh air, and a broad-spectrum probiotic like Life-Space Probiotic Powder for Children can provide added beneficial bacteria and support a healthy intestinal microbiome.”

“As an athlete, health was always a top priority for me, and that’s stayed with me since retiring. The importance of supporting general health, particularly throughout my motherhood journey so far, is simply one of many values that I share with Life-Space Probiotics. It is why I have really loved being a Life-Space Probiotics ambassador.” 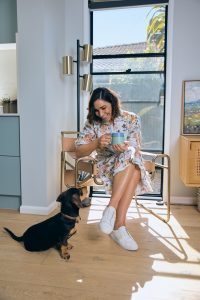